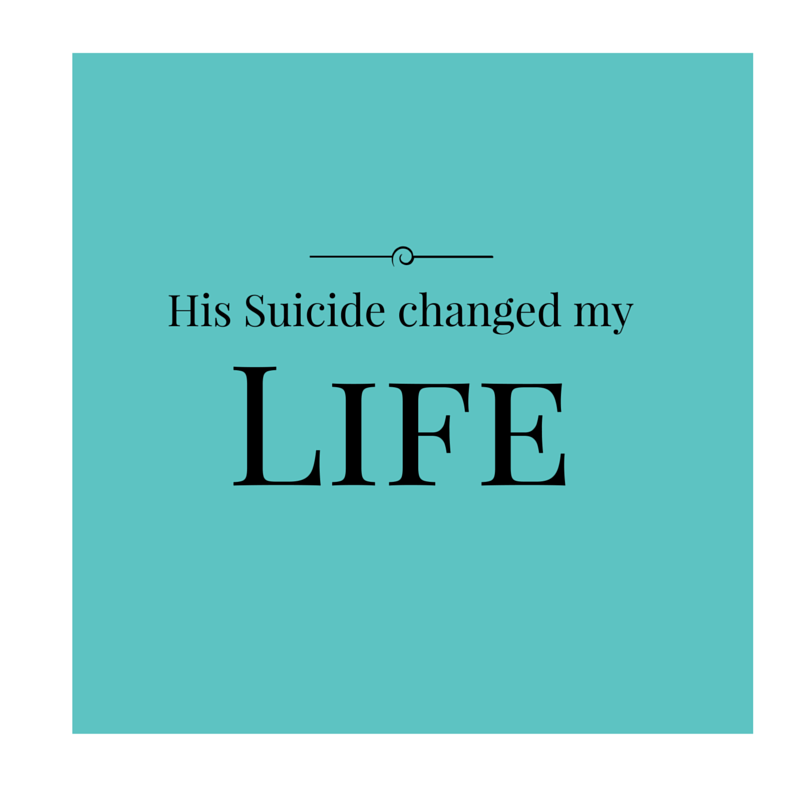 People who commit suicide are selfish.

The most prevalent being that the people who commit suicide, are selfish. The reasons given for this line of thinking is that the person who took their own life, did not think about the effect it would have on those around them. These comments are often expressed with lots of anger.

I sometimes wonder if this expression of anger, is not more an expression of guilt and fear. Guilt about that one should have done something to prevent the suicide and fear that if someone we know is capable of taking their own life, what do we need to do to avoid finding ourselves in the same situation.

You see I’ve experienced this first hand, when my brother, at the age of 21, decided to end his life. I had just turned 30 and for about a year my brother was living with my husband and I. He had just moved out and gotten his very first own “apartment”. We were all so excited for him, because it looked like he was finally getting his life together. He had a job and was studying part time – doing things that 21 year olds do.

I remember that horrid feeling when the police came to our house to ask us if we knew this young man, as our address was found in the car. He’d stopped in an open field not to far from our house and had chosen to connect a hose to the exhaust and lock himself inside the car. I was shocked beyond what words can describe. And then I became very angry. First, angry at my brother and then angry at myself. Here’s why.

Because my brother had been living with us for some time, I thought that we had created an environment where he could feel safe, enjoy life, study and talk to his big sister if he had problems. We involved him in our circle of friends and did our best to help him fit in to living big city life. Looking back it seems it was all just too much for him to deal with.

I felt tremendous guilt. I should have done something. I should have seen the signs. I studied psychology for heavens sake! Why did I not notice that something was wrong. Was I a bad sister? Why could my brother not talk to me? Were things so bad in his life that he felt the only way out was to take his own life?

What made all of this even worse, was that I had to tell my mom that my brother had died. It was the worst phone call I’ve ever made in my life. Having a bad news conversation took on a whole new dimension.

Even worse was having to make arrangements for my brother’s body to be transported to our home town, as my mom wanted to have the funeral there. To this day I don’t know who cried more, me or my one month old baby.

What made a tremendous difference for me in helping me cope with the loss of my brother, was the conversation I had with our pastor over a glass of red wine. What he said really hit home: My brother’s suicide was not a reflection of me, it was a reflection of what was going on inside him. Had I been able to save him that day, would I be able to save him in the future? One would never know. Once someone makes up their mind to take their own life, they’ll find a way to do it.

Since then, I’ve studied all I could about recognising the symptoms of suicide. What I’ve come to realise is that it is so difficult to identify, because many people seem to go through a phase where they appear to “get things together”. They become calm and very organised and to other others it may seem as if they are getting their life sorted. In fact they are, just not in the way we normally interpret it.

My brother had planned his suicide thoroughly. He’d gone to visit all his friends to say goodbye. They did not realise it at the time that that would be the last goodbye. He’d organised all his things in his little flat and left us a note. The note did not explain why he took his life, but merely said: “Face your fears and live your dreams.”

It’s been more than 10 years now and I still miss him every day….